CASEY AT BAT WALKS IT OFF AGAIN

Kansas City, Kan. — It had been 21 months and 19 days since Kansas City had walked off winners in a game at home. The man to do it was Casey Gillaspie, who had a 13th inning RBI single on September 1, 2019 against Sioux City. Fast forward to Juneteenth 2021: it was Gillaspie who delivered a walk-off winner as the Kansas City Monarchs (16-11) beat the Winnipeg Goldeyes (11-15) 5-3 in 11 innings on a two-run homerun by the former Wichita State standout.

It was a quiet four innings for both teams until the Winnipeg Goldeyes’ Wes Darvill hit a home run in the top of the fifth. The Goldeyes’ Darren Seferina hit another home run, scoring him and Sonny Ulliana to take the lead 3-0.

The Monarchs responded with a homer of their own by Darnell Sweeney off the batter’s eye. Sweeney’s home run scored him and Morgan McCullough, cutting into Winnipeg’s lead 3-2.

Erik Cha pitched an inning, allowing one hit and a single strikeout. Cody Mincey also pitched one inning and allowed one hit and two strikeouts.

Charcer Burks became the star with a wicked defensive play in the top of the eighth inning, catching what could have been a double, right by the home bullpen. Burks’ clutch play and Brian Ellington’s pitching kept the Goldeyes from scoring.

Kansas City hopped back to action in the bottom of the eighth and tied the game, with Grotjohn hitting a double to centerfield and then crossing home plate, thanks to a groundball single to centerfield by Jan Hernandez.

Brian Ellington pitched for an inning and allowed two walks and recorded one strikeout. Carlos Diaz took the Monarchs into overtime, pitching for two innings, allowing one hit and recording four strikeouts. Elroy Urbina (1-0) closed the game out for Kansas City, pitching for one inning, not allowing any hits. Urbina was credited with the win.

Both teams couldn’t manage to get on the board in the ninth, bringing the game to extra innings. It was a quiet tenth, but then the Monarchs cracked it back open in bottom of eleven with a two-run homer, courtesy of Casey Gillaspie, scoring him and Gabby Guerrero. 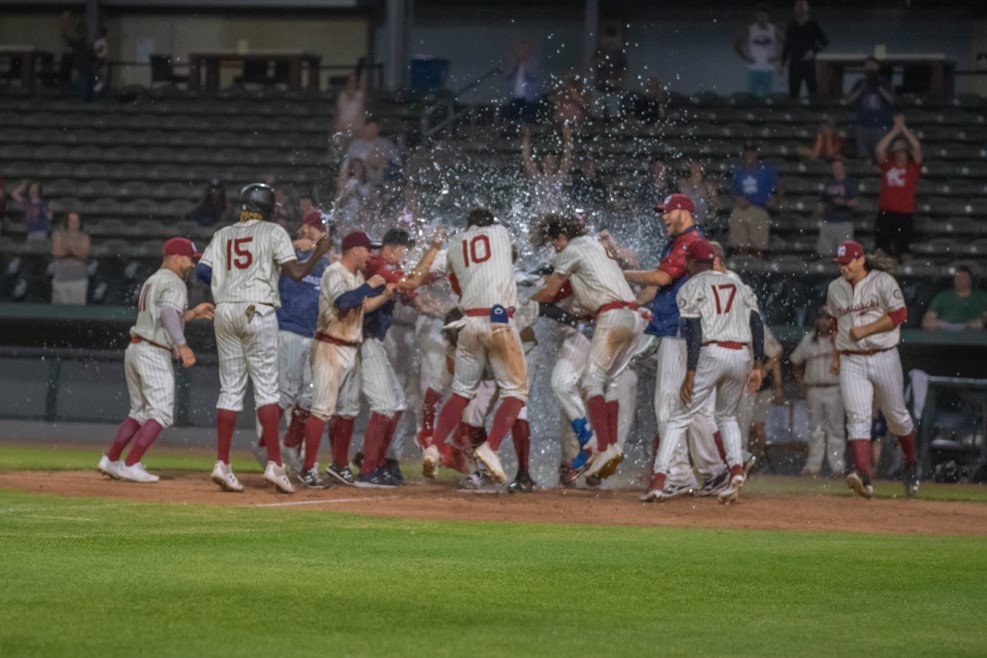 The Kansas City Monarchs will close out its three-game series against the Winnipeg Goldeyes Sunday at 3:00 p.m.

The Kansas City Monarchs will wrap up their homestand against the Winnipeg Goldeyes at Legends Field on Sunday afternoon. First pitch is set for 3:00 p.m. with the gates opening at 2:00 p.m.  The game can be heard on the Monarchs Broadcast Network with the pre-game beginning at 2:35 p.m. and the video stream airing on aabaseball.tv.

MONARCHS ADD A PAIR OF ARMS