HINRICHS NAMED EXECUTIVE OF THE YEAR 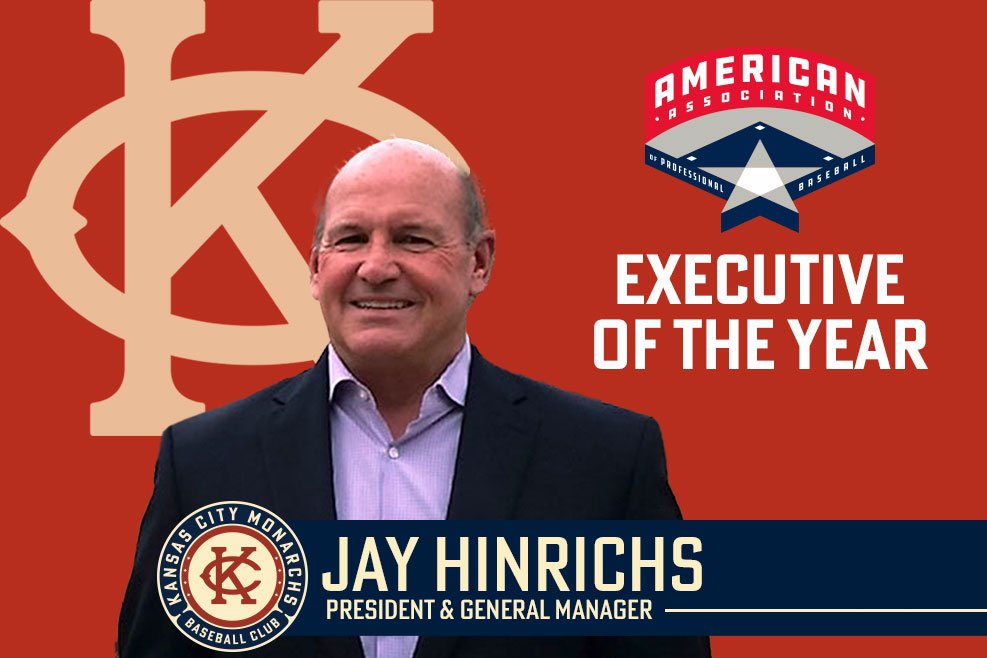 KANSAS CITY, Kan.—The Kansas City Monarchs have had one incredible year on the field and off, adding another accomplishment to “Reign Reborn” as the American Association has named Monarchs President and General Manager Jay Hinrichs the league’s Executive of the Year.

“This is certainly the definition of a team award – it belongs to our associates and interns, media team, the ballclub, our manager and coaches along with our 3rd party support organizations and event staff.  I could not be more proud of this organization or grateful for the opportunity to be part of the team.  I also appreciate all the help and guidance from the American Association leadership and the general managers across the league, especially during this inaugural year of the Monarchs,” said Hinrichs.

Jay Hinrichs took over the Monarchs’ day-to-day operations on September 23, 2020 after the team did not play because of the global pandemic during the 2020 season. The franchise then re-branded as the Monarchs in January of 2021, and Hinrichs has successfully guided the franchise through the first season under the new name.

The American Association Executive of the Year is voted on by the other league members, Managers, broadcast/media representatives and front office personnel. The Monarchs set numerous on-field records, but the ballpark, communication and hospitality drew rave reviews from visiting teams, broadcasters and fellow executives.

The Monarchs continue their post-season march this Friday in game 1 of the American Association Championship Series against either Fargo-Moorhead or Chicago. Those two teams will play game four of their North Division Championship Series tonight in Fargo with the RedHawks leading the series two games to one. The Monarchs will return to Legends Field on Monday September 20 to host games three through five, with game four and five to be played if necessary.

All post-season games can be heard on the Monarchs Broadcast Network with the pre-game beginning 30-minutes prior to first pitch and the video stream airing on aabaseball.tv.

Postseason tickets can be purchased by calling (913) 328-5618 or by visiting monarchsbaseball.com/tickets. For additional media requests, media members may contact the Monarchs Media Relations Department at (817) 739-3693. Stay tuned to MonarchsBaseball.com and the Monarchs social media pages for updates throughout the season