Kansas City, Kan. — On the anniversary of the day America gained its independence, the Monarchs claimed a series win over the Lincoln Saltdogs with a 14-11 win. It’s the club’s first rubber match victory since June 20th against Winnipeg.

After a quality start from Jake Matthys that night before, manager Joe Calfapietra handed the ball to Jose Taveras, who made his first start of the season. The 6-foot-4, 210-pound right-hander carved up the first two hitters he faced before things got wild. Following a two-out infield single, Taveras was called for a balk when the runner broke early from first base. Despite Taveras and Calfapietra’s protest of the call, the ruling wasn’t changed. However, there was a casualty to the Monarchs’ coaching staff, as pitching coach Mike Henneman was ejected from the dugout by home plate umpire Jordan Sandberg. Moments later, Lincoln first baseman Curt Smith rocked a two-run homer into the bleachers in left field — giving the Saltdogs a 2-0 lead.

Kansas City cut the lead in half in the bottom of the second. With runners at first and second and one out, Kevin Santa ripped a ground ball to second base. However, in an attempt for a double play, shortstop Josh Altmann threw wildly into the dugout allowing Gabby Guerrero to score from first. 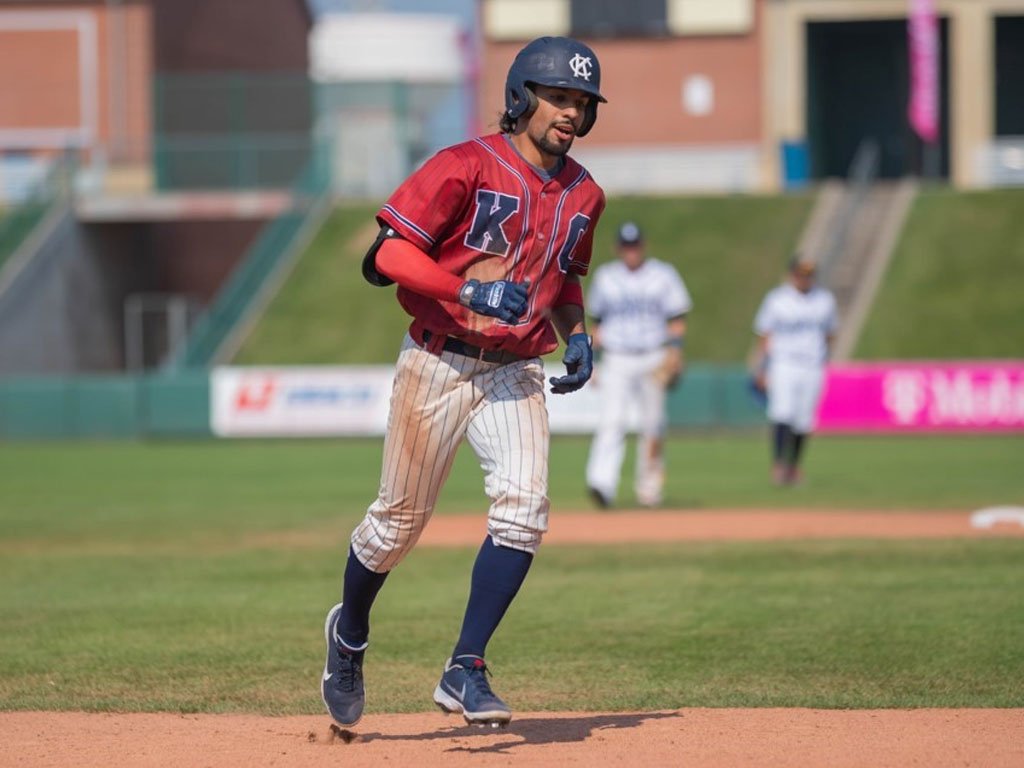 In the bottom of the third, the Monarchs finally took the lead on a two-RBI single from Casey Gillaspie and back-to-back RBI-singles by Colin Willis and Kevin Santa. All four runs came with two outs in the inning.

Lincoln managed to climb back into it in the top half of the fifth. With Taveras’s pitch count rising, Altmann made up for his error and scalded a two-run bomb to left field — trimming the lead to

5-4. It was the last batter Taveras faced in the game.

The Kansas City bats didn’t allow the Saltdogs much time for celebration, though. In the bottom of the fifth, the Monarchs tacked on three runs — two of which came on a two-run home run by Santa. The long ball was Santa’s first of the season and appeared to give Kansas City all the momentum they needed. Unfortunately, that wasn’t the case.

The Saltdogs erupted in the top of the sixth for five runs off Ramsey Romano and Jacob Lindgren – giving Lincoln the lead back at 9-8.

The back-and-forth action ensued, however, in the home half of the inning. With two outs, Ryan Grotjohn pounded a game-tying solo homer to right-center field. It was the second baseman’s first home run since June 2 vs. Sioux Falls.

While the offense worked like a machine, the bullpen faltered. After their five-run sixth inning, Lincoln grabbed back a two-run lead in the eighth. With two outs, Yanio Perez obliterated a two-run shot off Brian Ellington to break the tie. Even that, however, wouldn’t be the final nail in the coffin on a hectic 4th of July afternoon.

Just like they’d done all season, the Monarchs were relentless in the final innings. In the bottom of the eighth, Alexis Olmeda led off with a walk, Darnell Sweeney doubled, and Grotjohn drove in the 10th run on a play at the plate. In the ensuing at-bat, Jan Hernandez dribbled a ball to third base and Sweeney beat the throw home to tie things back up at 11. Moments later, Gabby Guerrero smoked the go-ahead single to center field to give Kansas City a 12-11 advantage.

Before the inning was over, Kansas City built a three-run cushion.

Carlos Diaz came on in the bottom of the ninth and slammed the door — capping off a series win and 4-2 home stand.

The Kansas City Monarchs will begin a three-game series, including one double-header with the Sioux Falls Canaries, on Tuesday in Sioux Falls. First pitch is set for 7:05 p.m.  The game can be heard on the Monarchs Broadcast Network with the pre-game beginning at 6:35 p.m. and the video stream airing on aabaseball.tv.