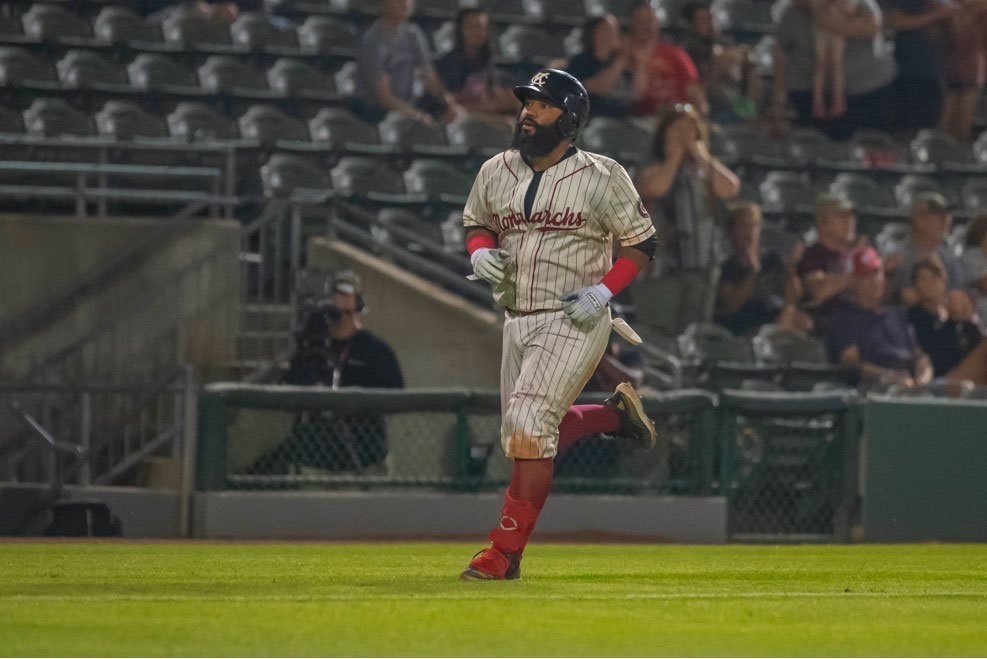 Photo credit John Ellis Kansas City Monarchs – August 5, 2021 Alexis Olmeda rounds the bases after his three run homer to give the Monarchs the lead in the 7th.

Kansas City, Kan. — The Kansas City Monarchs (47-24) come from behind to beat the Cleburne Railroaders (39-31) by a score of 9-6, thanks to a three-run homer by catcher Alexis Olmeda.

Fresh out of Washburn pitcher Brock Gilliam (2-0) got the win for the Monarchs, after pitching for one inning and recording two strikeouts. Jameson McGrane got the save when he pitched for two innings, recorded one hit with two walks and a strikeout.

Newcomer Ibandel Isabel kicked off the fun for Kansas City, hitting a two-run home run off of his first-ever pitch as a Monarch, scoring himself and Casey Gillaspie. Following the homer excitement, Will Kengor and Drew Ferguson each singled to get on base. Alexis Olmeda filled up the bases with a walk then a sac fly by Morgan McCullough scored Kengor.

Charcer Burks followed McCullough with another sacrifice fly and ended up scoring Drew Ferguson, bringing the Monarchs up 4-0.

The Railroaders tied up the ballgame in the top of the fourth, thanks to a single by Chase Simpson and a three-run home run by Hunter Clanin.

Cleburne’s Chase Simpson hit a two-run home run, breaking the tie and taking the lead in the top of the sixth 6-4.

Alexis Olmeda was fired up in the bottom of the seventh, hitting a three-run homer to pull ahead of the Railroaders. McCullough hit a ground-rule double to keep the crowd on their feet, then Burks hit a single to center to bring McCullough all the way home to put the Monarchs over the Railroaders 8-6.

Gaby Guerrero kept the momentum going in the bottom of the eighth, hitting a single, followed by Gillaspie walking to first. Ibandel Isabel then hit a single to draw Guerrero home from second base, making the final score 9-6.

The Kansas City Monarchs continue their series against the Cleburne Railroaders tomorrow night, first pitch is set for 7:00 p.m. with the gates opening at 6:00 p.m. The game will air on the Monarchs Broadcast Network with the pre-game beginning at 6:30 p.m., while the video stream airing on aabaseball.tv at first pitch.