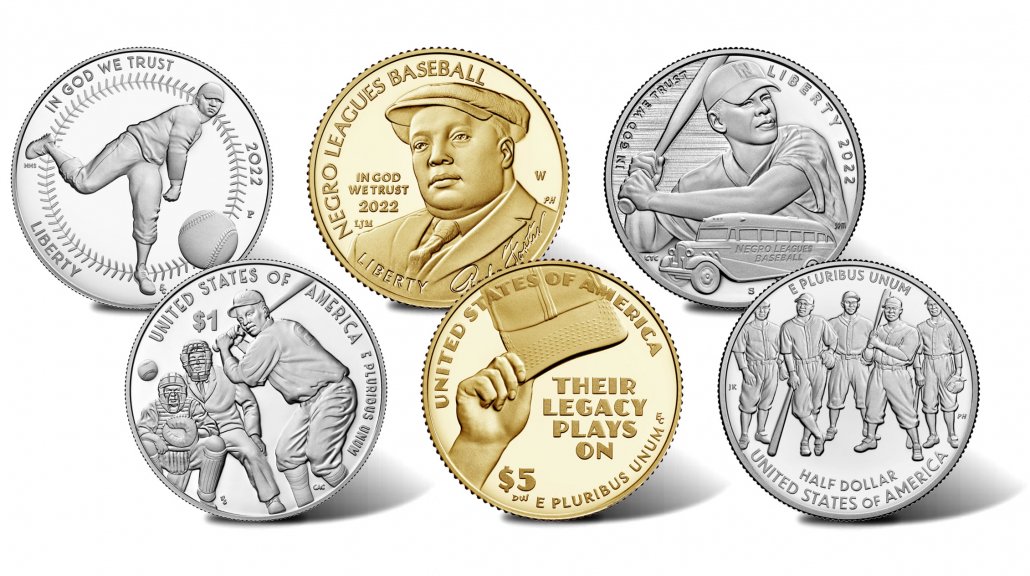 WASHINGTON – The United States Mint (Mint) will open sales for the 2022 Negro Leagues Baseball Commemorative Coin Program on January 6 at noon EST. This program commemorates the 100th anniversary of the establishment of the Negro National League, a professional baseball league formed in response to African American players being banned from baseball’s major leagues. Public Law 116-209 directs the United States Mint (Mint) to produce $5 gold coins, $1 silver coins, and half dollar clad coins as part of the program.

Product options, pricing, and order limits are below. Click on each product option to set up a REMIND ME alert.

The Jackie Robinson silver medal carries the same design as the Jackie Robinson Congressional Gold Medal produced by the Mint in 2003 in accordance with Public Law 108-101, which honored Robinson as a baseball great, civil rights leader, and political activist. The Coin and Medal Set will be limited to 15,000 units, and will be available to order during a 30-day window.

The Silver Dollar with Privy Mark features a privy mark on the obverse of the coin, commemorating the 100th anniversary of Negro Leagues Baseball in 2020. This product will be limited to 20,000 units, and will be available to order during a 30-day window.

“Just as this game connects families and communities, every day, across the Nation, the Mint connects Americans through coins,” said United States Mint Deputy Director Ventris C. Gibson. “It is now our great privilege to connect America to the extraordinary legacy of Negro Leagues Baseball.”

The Mint set pricing for the gold product options according to its Pricing of Numismatic Gold, Commemorative Gold, and Platinum Products table, available here. Introductory sales prices are in effect until February 7, 2022, at 3 P.M. EST, after which regular pricing will take effect. The household order limits are in effect for 24 hours.

Surcharges in the amount of $35 for each $5 gold coin sold; $10 for each silver dollar sold; and

$5 for each half dollar sold, are authorized to be paid to the Negro Leagues Baseball Museum to aid in its mission to promote tolerance, diversity, and inclusion.

The Mint accepts orders at catalog.usmint.gov/ and 1-800-USA-MINT (872-6468). Hearing- and speech-impaired customers with TTY equipment may order at 1-888-321- MINT. Visit catalog.usmint.gov/customer-service/shipping.html for information about shipping options.

About the United States Mint

Congress created the United States Mint in 1792, and the Mint became part of the Department of the Treasury in 1873. As the Nation’s sole manufacturer of legal tender coinage, the Mint is responsible for producing circulating coinage for the Nation to conduct its trade and commerce. The Mint also produces numismatic products, including proof, uncirculated, and commemorative coins; Congressional Gold Medals; silver and bronze medals; and silver and gold bullion coins. Its numismatic programs are self-sustaining and operate at no cost to taxpayers.

To reduce the risk of employee exposure to COVID-19 in the workplace, the Mint’s sales centers are closed until further notice. Please use the United States Mint catalog

site https://catalog.usmint.gov/ as your primary source of the most current information on product and service status.