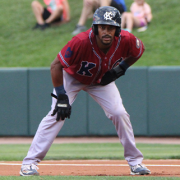 KANSAS CITY, Kan. – Mallex Smith’s resume speaks for itself: a former MLB stolen-base leader who spent parts of 5 seasons at the game’s highest level. But according to Kansas City Monarchs manager Joe Calfapietra, Smith’s skill on the diamond goes beyond the numbers.

“He’s fearless. The wall is never there for him,” Calfapietra said. “You have the speed, you have the instincts, but then you have the fearlessness when the ball goes up in the air. He has that little daredevil in him.”

Smith is set to return to the Monarchs in 2023, the club announced Tuesday. He joined the Monarchs on August 5 of last year, boosting a club in the middle of a tight race for the American Association West Division title. He wasted no time getting involved, leading off and stealing two bases in his Monarchs debut.

“Mallex was a big part of the push that we made at the end of last season,” Calfapietra said. “There was no doubt that he was a big contributor, offensively and defensively.”

The 29-year-old served as the Monarchs’ leadoff hitter during the 2022 stretch run, posting a .281 batting average and .374 on-base percentage with 11 steals in 27 games. He came up big in the team’s Labor Day regular-season finale, drawing a bases-loaded walk that would hold up as the game-winning RBI in a division-clinching victory over the Fargo-Moorhead RedHawks.

Smith played parts of five seasons in the major leagues with the Braves, Rays and Mariners. The Tallahassee, Florida native had a breakout season in 2018 with Tampa Bay, batting .296 with a league-leading 10 triples and 40 steals. After a trade, Smith suited up for Seattle in 2019 and led all MLB players with 46 stolen bases. He owns 120 major-league stolen bases in 442 games.

Smith has a .272 batting average and 419 stolen bases over his 11-year professional career. He most recently took the field for Toros del Este in the 2022-23 Dominican Winter League season.

Smith is the second player signing the Monarchs have announced in 2023. Right-hander Alex Valdez, who served as the club’s closer down the stretch last season, officially returned to the Monarchs on January 18.

Champions of the American Association in 2021, the Monarchs again finished with the league’s top regular-season record in 2022, though they lost to Fargo-Moorhead in a tight semifinal series. They open up their 2023 season on Friday, May 12, with their home opener set for Friday, May 19.

Fans can buy tickets, check out upcoming promotions and learn more about the team at MonarchsBaseball.com. Follow the Monarchs on Twitter @KSCityMonarchs, on Instagram @KC_Monarchs, and at Facebook.com/KCMonarchsBaseball. 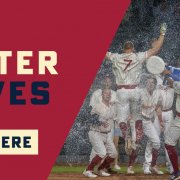 KANSAS CITY Kan. — One of the most exciting young pitchers in the American Association is coming back to the Kansas City Monarchs. Alex Valdez has re-signed with Kansas City for the 2023 season, the club announced Wednesday.

Valdez, a 23-year-old right-hander, joined the Monarchs late in the 2022 pennant race and immediately carved out a high-leverage role in the team’s already deep bullpen. He posted a minuscule 1.08 ERA over seven regular-season appearances.

“Alex is a young guy with a really good arm,” Monarchs manager Joe Calfapietra said. “His slider is a really good pitch, and he shows impressive competitiveness. He was throwing strikes in big moments last season, and we’re looking forward to seeing him grow this year.”

The native of the Dominican Republic was part of one of the most thrilling moments of the Monarchs’ 2022 season, getting the final out of Kansas City’s season-ending victory over Fargo-Moorhead to clinch the club’s third straight division title.

Valdez carried that momentum into the 2022 postseason, making four appearances, three of them scoreless.

Valdez came to KC from the Arizona Diamondbacks organization, where he suited up for High-A Visalia in 2021 and 2022. He has 96 career appearances in affiliated baseball, striking out 9.1 batters per nine innings.